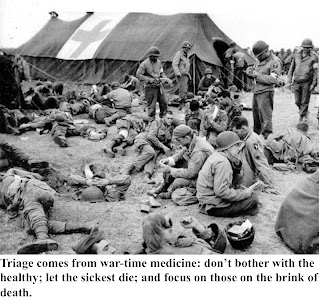 “Is it time to let some threatened species go extinct? The heretical notion is worthy of consideration, says a majority of conservationists contacted in a poll.” This survey, by Murray Rudd and published in Conservation Biology, found that a majority of conservation scientists agree that "Species and ecosystems are going to unravel so it is important that the conservation community considers criteria for triage decisions. If we don’t, ad hoc decisions could be even worse."
The term triage comes from war-time medicine, where a medic has to choose who will get their attention and likely survive versus who will be neglected and presumably perish. It involves three groups: those healthy enough not to need immediate medical attention; those who need immediate attention and could likely survive with it; and those who are close to death and from whom medical attention is withheld. The logic for this crucial cold-hearted third part of triage is that those most vulnerable would die despite efforts, and/or that efforts to save them would take away from time and resources to save others with a better chance. So conservation triage is the uncomfortable choice not to take action to save a population, species or ecosystem, knowing full well that withholding effort will likely lead to the extinction of that population or species, or to major changes in the ecosystem. 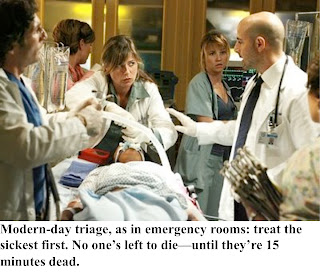 Are conservation scientists really ready to stop trying to save the more-endangered species because they're too far gone, as suggested by Rudd and the New Scientist? The survey actually suggests otherwise. A strong majority of the conservation scientists surveyed thought that the most vulnerable species should be the highest priority for conservation efforts: most agreed strongly that "the species with highest probabilities of extinction and ecosystems with highest probability of land-cover conversion should receive the highest levels of investment." That’s not cold-hearted triage, but its polar opposite.
Sure, many conservation scientists are willing to “consider criteria for triage decisions”, but apparently they’re not ready to cut their losses. They seem more than ready to do ER-type triage, where the more vulnerable are treated first, but no one is left out in the cold. And certainly, most are willing to recognize the finite nature of resources, and prioritize conservation efforts accordingly--but again, that's not triage in its controversial sense.

This controversy over triage is fundamentally a conflict between value systems: principles vs. ‘rational’ decision-making based on economics. We, along with many of our friends and colleagues, support biodiversity conservation largely out of principle, but of course we also favour rational decision-making. We generally believe that it's wrong that humanity should allow a species to go extinct. We don't necessarily believe that we should always save a species regardless of the cost, but we might believe that we should never give up.
Such a ‘heroic’ position is not unreasonable. It's perfectly legitimate to believe that as a society we ought to organize our activities to be life sustaining – for both humans and non-humans. We need creativity and innovation to meet human needs while preventing the extinctions of known species. We can reject any position that takes for granted the current structure or potential future trajectory of our economy. Costly expenditures on desperately-endangered species might be seen by some as a waste of money, but they can also be seen as a critical and appropriately expensive signal that our society is structured unsustainably.

This position does not conform to the prevailing 'rational' decision-making by which everything has its price. But for those who believe in sustainability, it’s perfectly rational.
Note furthermore, that in this case, the heroic position may actually be economically rational. Cold-hearted triage makes sense when resources are 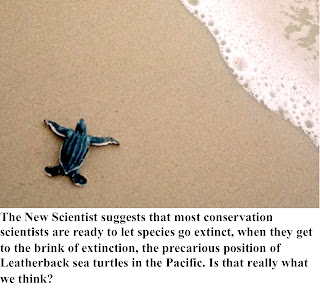 fixed (as with war-time medicine), but conservation resources are not fixed: they are a function of donors. And if donors are motivated at least partly by principle-based and heroic thinking, there are substantial risks to appearing cold-hearted and gains for those who attempt heroism. It’s unsurprising that conservation organizations have distanced themselves from cold-hearted triage thinking thus far.
We need conservation scientists and others to take informed, compassionate and, yes, heroic action to staunch species extinction.
~Kai Chan & Sarah Klain
Posted by Kai Chan at 12:52 PM 1 comment: