I have been attending meetings of the North Pacific Marine Science Organization (PICES) for over 10 years. The week-long meetings have always been the definitive place to hear about cutting edge physical and biological oceanographic studies of the North Pacific, and the influence of these physical and lower-trophic level effects on important marine species including marine mammals, birds, and commercial fishes.

However in recent years, thanks to the objectives of the overarching FUTURE (Forecasting and Understanding Trends, Uncertainty and Responses to North Pacific Marine Ecosystems) program and its focus on engagement, the PICES community has successfully broadened the types of science represented. It now includes a substantive human components section, as well as quality science on how multiple impacts may influence coastal communities, and the latest approaches to ocean monitoring. All told, the meeting now presents a stimulating, vertically integrated buffet of science from physical oceanography all the way up to human values.

At this year's meeting, held in Nanaimo, BC, CHANS lab was well represented in a number of these themes. I was pleased to have an opportunity to give a plenary talk on the opening day of the conference describing some key aspects of my thesis work related to model uncertainty. Kai's talks were the highlight of the human dimensions session, where he described our British Columbia Coastal Ecosystem Services project, and his work with NCEAS on integrating cultural values into decision making. The value of expert knowledge was addressed by our associate Stephen Ban, who explored the use of a Bayesian Belief Network to assess climate change impacts on the Great Barrier Reef. Our lab was also well represented in the cumulative impacts session, with post-doc Cathryn Clarke Murray doing a bang-up job on a method for assessing direct and indirect risk from human activities (she was awarded best presentation in the Marine Environmental Quality Sessions!), and by former post-doc Rebecca Martone (now at Center for Ocean Solutions) presenting some critical work on ground-truthing predictive models of cumulative impacts.

All in all, it was a great week for getting some of the cutting-edge work underway here at CHANS lab out there, and for us to get a taste of what is going on elsewhere around the North Pacific. You can search for our abstracts (or browse the entire abstract book!) here. Who knows - you might find the science as interesting as we do, and join us at the next annual meeting! 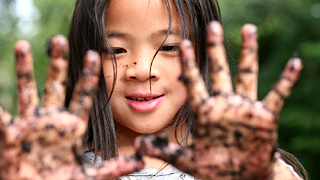 When I was little, my parents were frequently shooing my sister and me outside to play with the neighbor’s kids. For hours we’d roam the woods and fields, build tree forts, explore the stream and catch frogs and bugs. Now I’m the age when I mull over how I’d like to raise my possible future children. Based on my childhood and what I’ve learned, I want my (hypothetical) kids to get muddy, help me garden, and play in forests and fields. I look forward to accompanying them as they experience the delight and wonder that the natural world can evoke. In general, getting dirt under my fingernails and spending time outdoors, away from traffic and urban hustle, makes me feel more alive, calm and resilient. I know what it feels like to crave quiet, green spaces after accidents and stressful life experiences. Poets, philosophers, psychologists and I (!) have long recognized the therapeutic benefits of nature for physical and emotional health. Some of these benefits from nature turn out to be measurable, but many of the harder to measure benefits have not been given the attention they deserve.

A freshly minted multidisciplinary review (yes, I am a co-author) is a guide to the myriad intangible benefits to human well-being from knowing, perceiving, interacting and living with nature. Published in the Annual Review of Environment and Resources, this synthesis is, to our knowledge, the most comprehensive overview of this topic. In our paper entitled Humans and Nature: How Knowing and Experiencing Nature Affect Well-Being, we review literature on the intangible benefits from nature to our physical health, mental health, spirituality, certainty/sense of control, learning/capabilities, inspiration and fulfillment of imagination, sense of place, identity/autonomy, connectedness/belonging, and subjective overall well-being.

Intuitively, I recognize that nature matters in dimensions that can not be easily measured. This synthesis documents many of these sometimes abstract but critical dimensions. My co-authors and I recognize that nature has a darker side (diseases, parasites, insect infestations, etc.), but our holistic review of over 200 peer-reviewed articles from a variety of academic fields marshals substantial evidence that thinking about and being in ecosystems, both “wilder” and more domestic ones, is good for our brains, bodies and psyches.
Posted by Sarah Klain at 4:16 PM No comments:

Arm-chair environmentalism, science communication, and why I hate Twitter

"@LucidStream, Jordan you are a fool"

"Well you're an idiot!" was my sophisticated gut reaction to the random Twitter user's response to my second-ever tweet.


I dislike everything about it. I think that the notion of the immediate reaction to something without any reflection, the idea that you can say anything that matters in the limited number of characters you’re given, and that you have to do it immediately, and everyone will respond immediately with no reflection, I think it’s the worst of our society...

I thought, 'Yes. This is bang-on'. My skepticism of Twitter and its ability to foster meaningful dialogue began well before I started @LucidStream two days ago, and Toope's assessment echoed in my head the moment the first replies to my tweet sounded their arrival.

For what was I being accused of being a fool so directly (but distantly)? It was this tweet:

Which was, what I perceived, a justified salvo fired at the article's ("The Ocean in Broken" in the Newcastle Herald) careless language and phrasing, and overemphasis on a single line of anecdotal evidence to fuel its conclusions. The article describes yachtsman Ivan Macfadyen's sea voyages and is currently enjoying the rounds on Facebook, and so I thought it warranted a tweet. Ironically, I soon realized my most popular tweet had a typo; the result of trying to squeeze more meaning into the 140 characters alotted.

In my tweet I wanted to question the contradictions, like: "...the sea was dead... There was nothing to catch", while in preceding lines, (bags of) fish that were gifted to the yacht's crew by a large fishing vessel are described as  "...good, big fish, of all kinds. Some were fresh, but others had obviously been in the sun for a while". I wanted to raise a nuanced point about the potential harm of drawing derision and reinforcing stereotypes of environmentalists by using hyperbolic and vague language such as "the ocean is broken" to describe multitudinous marine issues. All of the ocean is broken?! How are we still alive?! I wanted to emphasize that even if you care about something, like the ocean, a lot, one boat trip is insufficient evidence to claim that the ocean is dead. And I had 116 characters to do it because the rest was taken up by a web address.

It didn't work so well.


Nonetheless there are three brief lessons from my neophyte interactions with the Twitterarti:

1) Language (precision) is key
'Broken ocean' aside, I believed that stating up front that "Some important marine issue [were] identified" by the article would insulate me from the public tirade accusing me essentially of hating the Earth. Nope. Admittedly, this is probably because I shouldn't have used such an affectively loaded term like "tear-jerker", but it's genuinely how I felt. Also, leaving a typo is just low-hanging fruit for the frothy-mouthed masses hunting for blood as vengance for hurt feelings. Oops did I say I should avoid loaded language?

2) Twitter is not the venue for (expressing) critical thinking
I like to think that, in general, my comrades who are concerned about environmental issues are careful and critical thinkers who have processed the evidence and have an appreciation for nuance. But I think Twitter has a tendency to corrupt the frontal lobes. It's clear that thinking twice before going on the attack is not a prerequisite for publishing on social media. Hence this post (not to mention the beautiful limitless room for me to ramble).

3) Not all tweets are created equal
It was a mystery to me, until this morning, why my other tweets are communing with tumbleweeds, while the 'ocean' tweet was drowning in a sea of hatred. When you have no followers, it's a case of real estate: location, location, location. Going back to the article I discovered my tweet among the top of the comments section in the Newcastle Herald. Ah-hah.I may have also temporarily closed the cover on my "Shit-Disturber's Dictionary" for subsequent tweets.

In the end, I still hate Twitter. But it is kind of addictive like a videogame, the exposure is surprising, and the (personal) benefits...well, that's to be seen.

Two (SNAPpy) New Routes through the Valley of Death 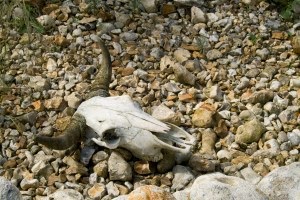 Ever since I started the life-altering Leopold Leadership training with twenty over-achieving new friends, I’ve been keenly aware of one thing: the vast majority of science for sustainability is doomed to be relegated to the dusty virtual shelves of the primary literature and—for a select few—short-lived local applications....

The 2013 meeting of the North Pacific Marine Science Organization (PICES) squarely targets international collaboration and making science useful for decision-making, but right from the get-go, the meeting has been a story about colossal government impediments to the nation-to-nation and science-policy interfaces.

First is the story of the absences on account of the US government shutdown. Whole sessions of this scientific conference are in tremendous flux, as US government presenters are both barred from attending, and from communicating via their work emails (e.g., about their travel/conference plans and changes to those). In this case, blame cannot be laid on the executive branch (the White House and federal agencies) alone, and where blame lies is beyond the scope of this blog.

Second is the very different story of Canadian government attendees. Ian Perry of Fisheries and Oceans Canada (DFO) kicked off the meeting with a wide-ranging and eloquent talk, including much that pertains to the future of the FUTURE program at PICES (Forecasting and Understanding Trends, Uncertainty and Responses of North Pacific Marine Ecosystems). And yet, at the same time, there are reports of numerous federal government employees being denied the opportunity to present or attend at the PICES meeting—including those working just minutes away at the Pacific Biological Station of DFO.

Clearly, the Canadian problem is not one of insufficient resources, for folks who could ride their bicycles to the meeting but were prevented from doing so. Instead, the problem lies in the bureaucratic process by which federal government employees wishing to attend a science meeting must apply six months in advance to a non-transparent process of approval.

South of the US-Canada border and north of it, we have different underlying issues and different bureaucratic processes by which obstacles are raised, but both nations have erected barriers to the productive communication and collaboration of Americans with Canadians and of scientists with policymakers.
Posted by Kai Chan at 2:18 PM No comments: