Risk, Credibility, and Justification:
What are we trusting who with, and why?

I came here today because I am deeply concerned about the potential consequences of the proposed Northern Gateway pipeline, both for Canada’s Pacific coast, and for future generations.
I have been working as a marine ecologist on the BC coast for close to 2 decades. I have a Masters Degree in Zoology; and extensive experience in both field data collection and spatial and statistical analyses. I have published peer-reviewed, scientific articles on the habitat of BC’s marine mammals, and on the importance of nearshore ecosystems. I understand many of the components of these systems, and have a good understanding of how the system works.
In my statement, I’ve decided that rather than repeat numbers you no doubt have in more formal submissions, I will try to synthesis for you what resonates most with me. I will emphasise the risks this project presents to Canada’s Pacific Coast, and why this coast has such value to Canadians. I will explain why I doubt the proponent’s ability to effectively reduce and mitigate those risks, and I will question the economic justification of the project, and argue that any such infrastructure expansions will actually undermine Canada’s long-term economic interest.
The proposed Northern Gateway pipeline crosses 2 huge mountain ranges where there is real winter. Avalanches and landslides are not uncommon. This in and of itself seems pretty daunting, and you have a submission detailing these risks to the pipelines themselves, and the challenges for access If there is a ruptured pipe. Especially in winter, it may take days to reach a leak. By then, the effectiveness of any clean-up is likely to be minimal.
The pipeline would cross over 750 water courses, dozens of which have high fisheries values, including the Fraser, Skeena, and Kitimat watersheds – these are incredible salmon-bearing rivers that provide one of the most inspiring, natural bounties remaining in the world – and they provide this for free. In academia, we call such things ecosystem services. Ecosystem services are easy to undervalue and take for granted. But once they are gone, they are often impossible to replace, and substitutes tend to be very expensive. 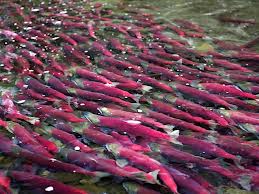 This particular service, this natural wealth supplied by these rivers, is extremely valuable to BC and Canada. And it will continue to produce a bountiful supply of salmon long after the relatively short term benefits of this pipeline are long gone.
Unless we wreck it.

The BC coast produces many other goods we enjoy such as clams, crabs, herring, rockfish; and also provides habitat for species that have social and cultural importance – sea otters, killer whales, and humpback whales are but three iconic examples. All these species depend on other components of the ecosystem such as forage fish, kelp forests, and eelgrass beds. This web of life feeds the spirits of residents and tourists, alike, and, as you know from formal submissions, generates considerable economic activity.
The entire coastal ecosystem and the services it provides us, the things we love to eat and use and enjoy, generate significant physical and spiritual benefits. This has immense monetary and non-monetary value. The natural productivity of the oceans is truly phenomenal. Year after year. Whales keep coming back, salmon return to the coast to make more salmon. Crabs, clams, mussels, multiply. And all this just happens. With no help from us.
And it will keep happening, for generations to come. Unless we wreck it.
There are many ways to wreck ecosystems. We dam rivers; we introduce disease; we over-exploit our fisheries … but Oil wrecks things in a very special way – especially biological things.
Animals and ecosystems are resilient to lots of changes: more predators, less food, more or less oxygen, higher or lower temperatures. If nothing else, they can often find a more suitable habitat. But coat something in oil, and biological function pretty much stops. For oiled individuals, it’s usually game over. For ecosystems, their productivity is severely degraded for decades at least, and perhaps permanently if they get pushed to far. 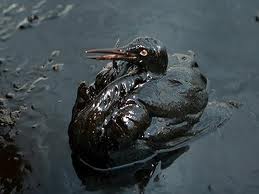 Now, I acknowledge and appreciate the degree to which my lifestyle depends on petroleum products. And I recognise the benefits of development. But this proposed pipeline, and in particular its marine transportation component, puts the entire coastal ecosystem at risk.
What are the benefits for taking such a huge risk? For BC, benefits seem to be primarily in the form of jobs. A number that is trivial compared to the sustainable resource based jobs that are potentially at risk from a maritime spill.
While there would be some significant revenues to government, you have a submission describing how just one major spill would cost more to clean up than the $2.5B in anticipated TOTAL govt revenues that the project is expected to generate over its 30-year life span. And given the Exxon Valdez experience, such clean ups in no way guarantee a return to pre-spill conditions, or the recovery of the lost resource sector jobs.
As described by the BC Government, this is in part an issue of regional equity, with BC being asked to bear the bulk of the risk, for a fraction of the benefits. However, unlike the BC Government ‘s implied suggestion that there might be an acceptable price for taking on this risk, what you have been hearing throughout your travels in BC is that the risks are just to large. Many believe that no risk of a spill is acceptable.
Now, while I accept that zero risk is not possible, you have a submission estimating the likelihood of a significant tanker spill at between 8 and 14 %. This is a big number, and it reflects the precarious nature of the proposed tanker route, in terms of both geography and weather.
Is the proponent – or anyone – really up to this challenge? Can the risks be minimised, and any consequences effectively mitigated?
Well, Enbridge has spent millions of dollars on advertising – radio; newspapers; TV; movie theatres; airbrush artists – trying to convince the public that the risk is minimal, that we can trust them. That they can handle this.
Unfortunately, the facts speak otherwise.
In the 2010 Kalamazoo spill, Enbridge was more concerned with keeping the oil flowing rather than making sure it was still in the pipe. In 2011, ExxonMobil continued to pump oil into the Yellowstone River for 45 minutes despite strong indications of a leak. In 2010, Alberta averaged nearly two pipeline failures a day. In 2012, Alberta had so many large spills that the govt undertook an investigation of pipeline safety.
Clearly, this is not just about Enbridge. This is the culture of an industry that sees devastating accidents as simply the cost of doing business.
Are they trying to do better? Perhaps. But then why would Enbridge limit its liability by creating a separate corporate entity to run the pipeline? Why would they misrepresent the navigational hazards of Douglas Channel by erasing a bunch of islands? Why would they downplay the risk of marine transport by using average instead of extreme storm conditions in their marine transportation models?

This intellectual dishonesty does not make them look trustworthy. It suggests that they either do not understand the risks, or are not taking them seriously. There is precious little evidence to suggest they will be willing and able to sufficiently reduce the risk, or effectively mitigate any impacts.
In terms of the economic justification for this project, I understand the fundamental argument is that infrastructure is needed to access new markets because of the discounted price paid by an over-supplied US market.
While this situation is real today, its persistence into the future depends entirely on economic models. Now, I am not an economist, but I do understand models. And I want to emphasise that model results depend as much on the underlying assumptions as they do on the data. The models for this project used a 30-year time horizon – the assumed life of the oil sands. They assumed an 8% discount rate. A discount rate effectively de-values the future value of what you are selling. It assumes that cash is more valuable today.

Thus, the economics of this project depend on exhaustion of the oil sands in 30 years, and the rather selfish attitude that fossil fuels are more valuable to us today, than they will be to future generations.
This inequity is often rationalised through the assumption of substitutability. The future will find alternatives. But is this a reasonable assumption? Do we really believe the global economy will wean itself off oil in 30 years? There are no cheap substitutes waiting in the wings. Substitutability is a poor assumption when dealing with fossil fuels, and thus brings the whole idea of a discount rate into question. It may well be that oil – left in the ground – is actually the best investment we can make for the future.
The current assumptions inevitably bias the economic model towards short-term gain. But what if we extended the life of the oil sands to 60, or 90 years? What if we treated undeveloped reserves as an investment instead of with a discount rate? Yes, we would forgo short-term profits, but the benefits of our natural resources would then extend across many more generations. With a longer-term perspective, the price differential would disappear, and because it would require a slower rate of oil sands development, there would be no need for more infrastructure or bigger markets.
Another economic consideration is the structure of royalties paid by oil producers. You have received a submission detailing how oil company royalties in Canada are much lower than other oil-producing countries such as Norway. Surely it would be sensible to revisit oil & gas subsidies and incentives to ensure that they align with long term, Canadian objectives and values rather than corporate ones. Ensuring Canada gets as much value as possible from our resources is clearly in the best interest of Canadians, in both the short and long term.
Given the vulnerability of Canada’s Pacific coast, the magnitude of the risk, the questionable commitment of the proponent to managing and mitigating the risks, and the alternatives that exist to maximise benefits to Canadians without a pipeline, I believe you will agree with me that this project is not in the best interest of Canadians, and is best left on the shelf.
You also need to ask yourselves who benefits the most from the breakneck development of Canada’s resources. Ripping & shipping as fast as we can benefits primarily the producers. I therefore ask that as part of your report, you recommend to the federal government that engage with Canadians in producing a more wide-ranging economic analysis. One that reflects a broader set of values than just short term revenue and jobs. One that balances returns today with equity for future generations, and meaningfully considers the values of conservation and sustainability. One that considers alternative royalty structures, and a broad range of alternative timelines and development alternatives.
There is much more value here for Canadians than what is suggested by industry-commissioned economic studies. Such a comprehensive analysis should be included in a National Energy Strategy, to ensure that any projects we undertake in Canada equitably serve both present and future generations.
You have an opportunity to move Canada in a more sustainable direction. I urge you to take a long term view, and recognise that it is our moral duty to proceed conservatively. Not just for me, or me and my children, but for my grandchildren and their children as well.
Please consider what kind of legacy we will be leaving them.